Early ACL Reconstruction may Protect the Meniscus After an ACL Rupture 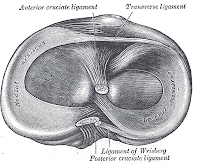 Does anterior cruciate ligament reconstruction prevent development of meniscal damage? Results from a secondary analysis of a randomized controlled trial.

Anterior cruciate ligament (ACL) rupture is a common injury in sport that can compromise long-term joint health and greatly affect an athlete’s short- and long-term quality of life. One critical factor with respect to the long-term joint health is the status of the meniscus. We know from observational studies that a delay in ACL reconstruction may increase the risk of meniscal damage over time; but, there is no data from randomized clinical trials. Therefore, Snoeker and colleagues used data from the KANON study, which is a randomized controlled trial, to determine if new or worsening meniscal damage over 5 years after an ACL injury differed between people receiving either an early ACL reconstruction or an optional delayed ACL reconstruction. The KANON study included 121 active adults who underwent a knee MRI at both baseline and 5-year follow-up appointments. For the current study, these MRIs were obtained and read to observe meniscal damage at the follow-up appointment. One radiologist used The Anterior Cruciate Ligament Osteoarthritis Score (ACLOAS) to grade meniscal damage. The authors evaluated group differences in new or worsening meniscal damage or the severity of meniscal damage.

During ACL Rupture Treatment, We Should Treat the Knee and the Mind
Recovering from an ACL Reconstruction Starts Before the Rupture
Elite Athletes Demonstrate a Small Decline in Performance Following an ACL Reconstruction
The Meniscus is Key to Long-Term Joint Health
Maybe It’s Time to Shake Up Your ACL Rehab Protocol