Are Football Related Concussions Causing a Behavioral Shift Away From Participation?

Take Home Message: A recent decline in high school football
participation coincides with an increase in news reports on football and brain
injuries. 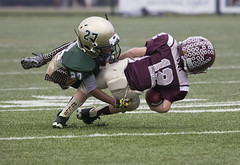 The recent decline in adolescent boys
participating in American football may be influenced by media coverage of
football-associated health risks (concussions, chronic traumatic
encephalopathy). However, there is little data available to support this
notion. Therefore, the authors looked at football participation and news
coverage of football-related concussions from 2001 to 2016. The authors extracted football participation numbers from the National Federation of State High School Associations and news reports about traumatic brain injury and football from the LexisNexis Academic public database. The authors found
that from 2002-2008 there was a 9% increase in high school football participation;
however, from that point to 2016 there had been a ~5% decline in participation.
Additionally, the authors reported that
the number of news reports about football and brain injury was steady from 2001
to 2008, and then there was a marked increase in reports from 2009 to 2016. In
contrast to football, the overall participation in high school athletics for
adolescent boys is still increasing.


This study was interesting because the
authors noticed that the timing of the shift from growth of high school
football to a decline coincided with an increase in the number of news reports
regarding American football and brain injury. While news coverage may be
related to the decline in football participation it had little impact on other
sports, in which participation rates continue to rise. We must use caution with
these findings because a correlation between increased news coverage and a
decline in football participation does not suggest that the news reports are
causing the decline. There may be other factors leading to this behavioral
shift such as a growing cost to athletes to participate in football or choosing
to participate in other popular sports such as lacrosse or soccer. It would be
fascinating to distinguish if this decline in participation led to a decline in
high school concussion rates. It would also be interesting to follow up with
high school students to determine if his/her decision to not participate in
football was due to concerns about head injuries. Future research should
further investigate the factors that are driving this behavioral shift away
from football participation. Recreational sports, including football, are
valuable strategies to promote physical activity. Hence, it is important for us
to understand the decline in high school football and its implications (e.g., are
athletes abandoning sports or switching to noncontact sports?). We also need to
better understand how the media portrays brain injuries in football and help
educate parents, athletes, and coaches when misinformation is provided. Currently,
medical professionals should continue to educate athletes on the risks and
mechanisms of a concussion, and ensure they understand that concussions can be
sustained in many sports, not just football.

Questions for Discussion: Do you see a decline in high
school football? Do you believe athletes that do not choose to play football
are still participating in other contact sports?