Does Sport Participation Give You a Longer Life?

Observational studies can enhance a clinician’s understanding about the
long-term outlook for a population including, quality of life, and mortality. For
example, if clinicians better understand if participation in certain sports or
level of competition compromised long-term health, then some type of early
intervention program may be devised to limit the risk of chronic disease. Therefore,
Kettunen and colleagues completed retrospective cohort study to investigate the
life expectancy and mortality rates of former elite athletes. A total of 2675
former Norwegian elite athletes (track and field, cross-country skiing, soccer,
ice hockey, basketball, boxing, wrestling, weightlifting and shooting) were
included in the present study and were matched with 1712 control patients
(identified through public archives). Causes of death were defined by
International Classification of Disease (ICD) codes. Median time to follow-up
was 50 years. Overall, 2,833 participated died including 2,293 (80%)
participants who died from natural causes. Life expectancy was greater in
endurance (cross-country skiing, middle- and long-distance running) and team
sport (soccer, basketball, ice hockey, jumpers, short-distance running, and
hurdlers) athletes than controls (see Figure). Natural-cause mortality was
lower in all groups of former athletes compared with controls. The most
commonly recorded cause of death was heart disease (479 athletes, 336
controls). Former endurance and team sport athletes had lower risk for death
from ischemic heart disease and stroke. Compared with controls, former
endurance and power sports had a reduced risk of death related to
smoking-related cancer. Boxers may have a greater risk of dementia mortality
compared with controls. 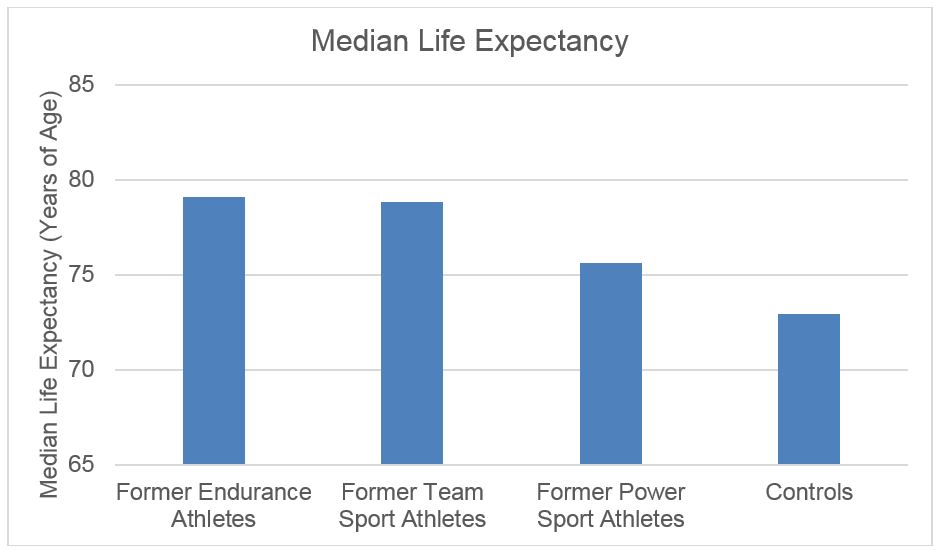 The data presented in the current study should be of interest not only
to clinicians but to all active persons. The data here seems to suggest that
participation in aerobic activity has a positive impact on overall life
expectancy. Further, participation in these activities may delay the
development of heart disease. While this is encouraging, more research should
be done on the subject to detail if this increase in life expectancy and
disease resistance is due to the activity in question or some other factor like
genetics or other lifestyles. Something not researched in the current study that
would be beneficial would be patients’ demographic data (BMI, past medical
history, etc.) at the time of their deaths. In could be possible that exposure
to these activities at a younger age helped the former athletes stay active for
longer after discontinuation of the elite activity. This is realistic
considering that many of the sports (soccer, basketball, ice hockey, jumping,
short distance running, hurdling, cross-country skiing, middle and long
distance running) are all sports that an athlete can decrease activity levels
while still remaining active in the chosen sport. It is important to keep in
mind that these athletes were all male and competing at an elite level. Hence,
it will be helpful to see if female athletes and athletes at other competitive
levels also benefit from longer life expectancy and delayed risk of heart
disease. Until a definitive statement regarding participation in sports and
increased life expectancy can be made, a more detailed analysis should be
completed. Until this time, clinicians should encourage and educate their
athletes to continue to participate in life-long physical activity regardless
of the sport.

Questions for Discussion:
Have you seen a similar trend in former athletes (do former athletes  seem to experience less disease)? If so, do
your observations align with the trends reported here?