Take Home Message: A patient who is young or has a meniscal
injury is more likely to have an anterior cruciate ligament surgery (either
early or delayed).

We
have had quite a few posts on Sports Med
Res surrounding anterior cruciate ligament (ACL) tears and the subsequent
management of this injury (see a sample below).
However, we still need to determine how to identify who may respond well
to conservative treatment.  Therefore,
the authors aimed to define the rate of delayed ACL reconstructions and to identify
predictors of early or delayed ACL reconstruction. The authors retrospectively
assessed population-based medical records to identify all of the individuals in
one county of the United States that had an ACL injury with no other concurrent
ligament injury nor fracture between 1990 and 2010 (1841 patients).  Using medical records, the authors found that
62% percent of patients had ACL surgery within 1 year of injury.  Only 32% of the 661 patients who were treated
nonoperatively for the first year after their injury underwent an ACL
reconstruction up to 10 years post injury (see Figure).  Within this cohort, a patient who was younger
or who had a meniscal injury was more likely to have an early or delayed ACL
reconstruction. 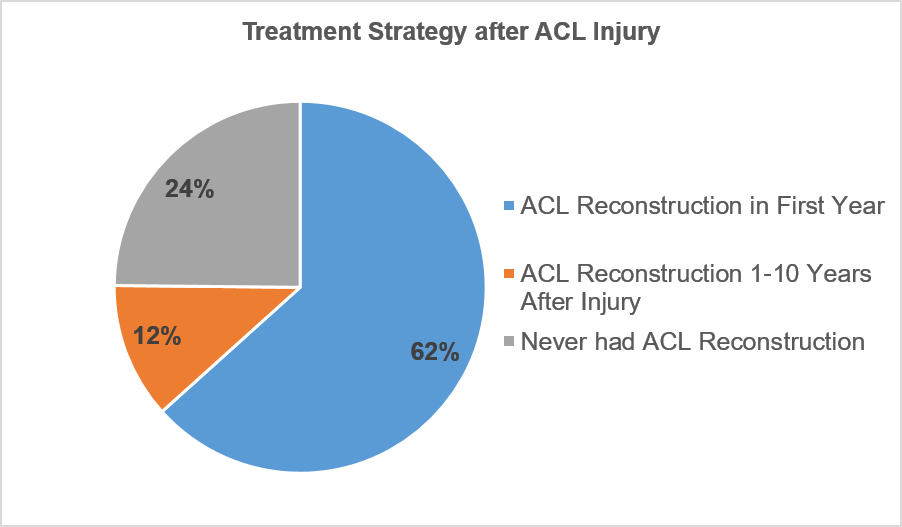 The
findings of this study are interesting because these authors found that if
participants could make it to 1 year after an ACL injury then only one-third
opted for a later surgery.  Oftentimes
ACL reconstruction is sought relatively fast after injury. However, it may be
worth making an attempt at conservative care and then making a decision regarding
surgery by 1 year post-injury.  Younger
patients or patients who had a meniscal injury are more likely to undergo a
surgery (either early or delayed).  This
may be a reason to consider counseling these types of patients about having
earlier surgery.  It would be interesting
to see what level and type of activity these individuals are attempting to
return to with conservative management. Longer term follow-ups or radiographic
findings would be interesting in this cohort, to determine if a delayed surgery
with a secondary meniscal injury has poorer long-term outcomes than a
participant who opts for early surgery.
The standard practice seems to be swaying, and is now a little less
clear.  It seems that initial conservative
management may be a more viable and cost-effective option than it has been in
the past 5-10 years and clinicians as well as athletes could consider it.

Questions
for Discussion:  What do you take into consideration when thinking about ACL reconstruction for your patients?  How do
you typically manage ACL injuries in the clinical setting? Are you noticing any
changes in your clinical practice?

Pay Now, or Pay later…ACL Reconstruction Costs are Similar Whether Early or Delayed
Which is Better for ACL Surgery: Right Away, Later, or Never?